Dragon Ball Super (ドラゴンボール; Doragon Bōru Sūpā; commonly abbreviated as DBS) is a recent installment in the Dragon Ball franchise, a sequel to the Dragon Ball Z anime and manga which began airing on July 5, 2015. It is the first Dragon Ball television series featuring a new storyline in 18 years since the final episode of Dragon Ball GT in 1997.

A Dragon Ball Super manga is being produced alongside the anime. The series is developed by Toei, in a similar process to the Dragon Ball, Dragon Ball Z, and Dragon Ball GT animes. The series plot takes place after the Majin Buu Saga, in between the ten year gap towards the 28th World Martial Arts Tournament.

Akira Toriyama writes the plot outline, and then a team of writers creates the script, expanding, adding, and changing elements from Toriyama's plan as they deem appropriate. The original suggestions for some of the storylines come from the editorial office, then Toriyama writes the outlines. However, Toriyama has seemingly complained about the anime's quality at points.

The series' plot begins showing the aftermath of the Majin Buu Saga, then proceeds to retell and alter the stories of Dragon Ball Z: Battle of Gods and Dragon Ball Z: Resurrection ‘F’ as new story arcs. The next part of Super following this takes place in the Universe 6 with the Z Fighters searching for the Super Dragon Balls.

A young celestial mage, Lucy Heartfilia, runs away from home and travels to the land of Fiore to join the magical Fairy Tail Guild. Along the way, she meets Natsu Dragneel, a teenage boy looking for his foster parent, a dragon named Igneel, with his best friend, Happy the cat. Shortly after their meeting, Lucy is abducted by Bora of Prominence, who was posing as Salamander of Fairy Tail, to be sold as a slave. Natsu rescues her and reveals that he is the real Salamander of Fairy Tail and has the skills of a Dragon Slayer, an ancient fire magic. He offers her membership into the guild, which she gladly accepts, they along with Erza Scarlet — Armoured maiden, Gray Fullbuster — Ice Maker, and Happy become a team performing various missions offered to the Fairy Tail guild.

The second incarnation of the very popular NARUTO anime. It covers Part II of the manga storyline which takes place two years after Part I (which ends with the Sasuke Retrieval arc, episodes 107-135 of the first TV series). The anime chronology differs from the manga as the Shippuuden series happens two and a half years after the end of the first Naruto series.

The story revolves mainly around Uzumaki Naruto's and Haruno Sakura's new adventures and their search for Uchiha Sasuke after he left Konoha-gakure (Leaf Village) to gain Orochimaru's power. The plot also shows a more active Akatsuki in their quest for obtaining all the tailed beasts.

After his failed attempt to retrieve Sasuke, Naruto learns that circumstances have granted him slightly less than three years to prepare for a confrontation with Orochimaru, who has to wait that much time before he can transfer into Sasuke's body. Naruto also must prepare for his eventual confrontation with Akatsuki, who are after the demon sealed within him. To prepare, Naruto leaves the village and undergoes intensive training under Jiraiya. At the same time, Sakura becomes Tsunade's apprentice, and Sasuke trains under Orochimaru. Thus, all three members of the original Team 7 are now training under one of the Legendary Sannin.

It was a time when pirates ruled the seas. Several bands of pirates were battling over the great hidden treasure, One Piece, which was left by the now legendary pirate captain, Gold Roger. There was a young boy who admired the pirates, his name was Monkey D. Luffy. One day, he mistakenly eats the devil's fruit and turns himself into a rubber human being.

Ten years have passed since that incident. Luffy sets out to sail all alone. He sets out to become a great pirate captain and that's when his great adventure begins. "I'm going to be the Pirate King! I'm going to get One Piece!". 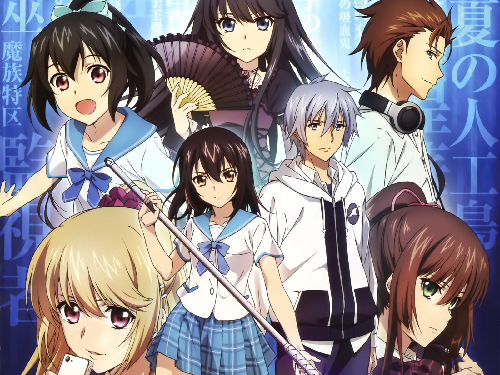 The school action fantasy story of Strike the Blood revolves around Akatsuki Kojou, a boy deemed the world's most powerful vampire (once thought to only exist in legend and lore), and Himeragi Yukina, a girl entrusted with watching over the vampire and if needed, hunting him down.